The Birdwatching Hotspots of the State of Puebla, Mexico 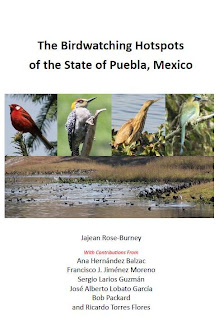 I woke up this morning thinking about how lucky I am to be here in Puebla, in Mexico, as a Peace Corps volunteer. I am two years in and only have five months to go. The time flew by, although it feels like I left my old life in Buffalo, NY, decades ago. I quickly ate, showered and headed out the door for work.

As I was on the bus to work I realized that almost every aspect of my time here has been rewarding. There are the Peace Corps clichés; I’ve met and befriended some wonderful people, eaten new and strange foods, and learned a new language. And I’ve learned to live with less and be happy more. Then there are things that are less cliché; many Peace Corps volunteers sign up wanting to change the world and help people, but realize quickly that those things are really hard, and go home disillusioned.  Although I haven’t changed the world, my work has been productive and I’m a little bit closer to knowing what I want to be when I grow up.  I’m not disillusioned (although my upcoming job search may fix that).

It has been fun experiencing the cultural differences that exist between the US and Mexico. There are some big obvious ones, like language, but there are many small and subtle differences as well. Here’s a list of some of my favorites:

After much deep thought, I reached the office. I sat down and started thinking about the last two years of travel. The travel, of course, has been outstanding. I haven’t been to many other countries, but I have to think that Mexico must be one of the best places to travel to in the world. Not only do you have the world famous beaches and pyramids, but every part of the country is different, with its own culture, architecture, food, and natural wonders. And the inexpensive and efficient bus system makes getting anywhere easy and cheap.

In my home state of Puebla alone, a trip equivalent to going from Buffalo to Rochester will first take me to the ruins of the largest city in ancient Mesoamerica, Cantona, then through enormous and undiscovered volcanic crater lakes in the high, windswept Altiplano, then past North America’s third tallest mountain, the perpetually snow-covered Pico de Orizaba, onwards to Cuetzalan, a “Pueblo Magico” in a tropical cloud forest surrounded by tall waterfalls, and finally down to rainforests on the Gulf slope.


If I head west, as if I were taking a trip from Buffalo to Fort Erie, I would first go through Cholula and see the world’s largest pyramid, then I would reach the Paso de Cortes, the same route that the conquistador Cortes took when he invaded the Aztec city of Tenochtitlan and its floating islands. The road through the pass starts in green oak forests, then goes through thick pine forests, and finally through alpine meadows at the base of Popocatepetl and Izztacihuatl, Mexico’s second and third tallest mountains, the former being one of the most active volcanoes in the world. Just on the other side of the pass you’ll find Mexico City, one of the world’s largest and most exciting cities.

If I head southeast, on a trip similar to going from Buffalo to Pittsburgh, I’ll start off in the tropical deciduous forests of the Mixteca, whose colorful flowers come out only during the dry season after all of the leaves have fallen from the trees. These same trees have vibrant silver, red, green and yellow tree trunks. Two hours into the trip I will reach one of the driest places on earth, the Tehuacan Cuicatlan Biosphere Reserve, where thousands of species of cactus - including tall organ pipe cactuses, giant and tiny agaves, a large, round, prickly cactus known locally as “mother-in-law’s chair,” and a tree that looks like an enormous elephant’s foot - have ingeniously learned to survive the harsh conditions.

And if I go nowhere at all, I will be in the historic center of the city of Puebla, a world heritage site full of 400-500 year old buildings, massive and elaborately decorated cathedrals, lively plazas, and hundreds of restaurants and cafes.

I spent most of the day reminiscing, thinking about all of the positive things that this experience has given me. As the day came to a close, I turned off my computer and headed home. But, as I approached my house, my mood suddenly changed. The same thing happened that happens almost every day; I had to cross the street. Every Peace Corps volunteer has their things, their annoyances, those common every day events that drive them crazy. And when those things get to be too much, some volunteers pack up and head home. When a Peace Corps volunteer decides to leave early they are asked to do a report explaining why. One former volunteer in this situation said that aside from the typical stress of starting a new job, moving to a new house and having to make new friends, the salt wouldn’t come out of the shaker. No matter how hard the volunteer shook it, the salt just wouldn’t come out. The volunteer got fed up and had to leave forever. I’m sure most travelers to the tropics can relate.

And I sure understand. You go through an incredibly long and painful selection process just to get into Peace Corps, complete with the poking and prodding and the scraping and drilling of medical and dental exams. And when you finally get in, and get what you wanted, you realize that what you wanted and what you got was to be stuck in some foreign country for two years where the water makes you sick, the food gets boring (you can have five-hundred names for a taco, but it’s still a taco), the nearby volcano keeps inching closer and closer to exploding and killing you all, and the people speak a foreign language all day, every day, not just in an hour-long class.

My thing is crossing the street. You see, where I come from, the pedestrian has the right of way. I know, there are drivers that aren’t aware of this and some that just don’t care, but in general, this rule holds true. In Puebla this is not the case. There are very few marked pedestrian crosswalks. The stoplights aren’t programmed to consider walkers. Drivers don’t stop at stop signs. And if you are at an intersection crossing the street, walking parallel with flowing traffic,  drivers will turn into you, without using their blinkers, without slowing down, and just zoom right passed you as if you weren’t there. In fact, if they do manage to notice you, they will be mad at you for being there. It doesn’t matter if you are an old lady or a small child, if the car is turning into your crosswalk, you better move out of the way fast. The only thing that a driver will do so that no one dies is to honk the car horn as a warning. I’m convinced, though, that this has less to do with not wanting to kill you and more to do with the fact that no one in Mexico has auto insurance; it would be prohibitively expensive to scrape all that human goo off the hood of the car, but I guess not so expensive that slowing down is in order.

And so, at a single intersection this afternoon, where several cars turned into my pedestrian crosswalk and tried to kill me, all giving me angry stares, I lost it. I kept it to myself, I never acted out, I never said anything to anybody, but I lost it. My mind raced. My fists clenched. I started to sweat. And I ran to cross the intersection as fast as I could.

Unfortunately, it was no different from other days.  I got home, turned on some American TV (Two and a Half Men in English), and started counting down the days. Two years down. Five months to go. Five long months. Then I made myself something small to eat.  Now where’s that f@#&ing salt.