End of the first week: Peace Corps in Queretaro, Mexico

The first week of Peace Corps in Mexico is over, so here is a summary of everything that happened.

We began in Washington D.C., after flying in from Buffalo. We (my wife and I) arrived in the afternoon and stayed at the Washington Plaza. It had a pool that fronted a busy traffic circle, but was still a good place to relax. The same afternoon, Ana and I walked to the Mall, saw the Lincoln and Washington Memorials, and almost went to buy Space Ice Cream at the Air and Space Museum (we were just too tired to walk anymore, and Ana's shoes were eating her socks). Space Ice Cream is the food that astronauts eat in space, and, as disgusting as dehydrated ice cream sounds, is one of my favorite treats.We stopped in front of the Whitehouse and I almost felt excited to see it - Obama lives there! It was a bit of a surreal experience, being in the most American of American cities, preparing to leave the country for two years.

We had a full day of orientation and training classes the following day and left for Reagan airport the second night at 1am. We drove through the Mall, with each monument lit up like in the opening credits of West Wing episodes. We arrived at the airport at 2am, even though the terminal didn't open until 4am, and the plane didn't leave for Dallas until 6am. After boarding the plane and taking off, we finally arrived in Mexico City at noon, having not slept for a couple of days, and immediately got on a bus for Queretaro. Four hours and one long sleepless drive later, we arrived in Queretaro.

The truth is, though, that reaching the hotel wasn't as simple as that. The hotel we were going to was in small, rural community outside of Queretaro. The bus we were on was large, and the streets we were on were tiny - narrow, dusty, cobble stone - so narrow that bus couldn't make turns on one try, or even two or three. The giant tour bus kicked up so much dust that the locals walked by choking and covering their faces, a perfect entrance for a bunch of Americans trying to fit in. 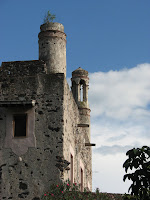 After a few wrong turns and couple of times getting stuck on steep hills, we finally arrived; Hacienda el Castillo. It was a sprawling, walled-in historic castle, complete with church, dormitories, cafeteria, and dairy. Its history is impressive - parts of it built in the early 1600's as one of the first Spanish colonies in Mexico - and its current condition is immaculate. Beautiful gardens, courtyards with fountains, and wonderful colors everywhere. Our room even had a loft bed. Meals, cooked by the local chefs known as the three Juanitas because they share the same name, improved with time as they slowly transitioned to real Mexican food, like a soup called pozole verde, and away from "American" food (they wanted us to feel at home), like cream cheese lasagna and pork meatloaf. The hotel has several interesting projects in the community, including the organic dairy and a community center with an organic vegetable garden.

We spent several days at Hacienda el Castillo, doing more training exercises. On our last day there, Saturday, they finally told us what our eventual job sites and job descriptions were, and I have to admit that I was a little disappointed. I wanted to work on conservation projects in small towns in or near a national park or biosphere reserve, and many volunteers will be doing just that. In fact, one volunteer will be working in a town with only 30 people - she will represent over 3% of the population! Instead, my eventual location will be just the opposite; Puebla, southeast of Mexico City, a town of between 1.3 and 3 million people, the largest of any Peace Corps site in Mexico.

I will be working at a regional SEMARNAT office (secretaria de medio ambiente y recursos naturales, loosely translated as the agency for environment and natural resources) to develop a community center. The work is somehow related to watershed planning, and somehow related to "ecotecnias" (small businesses related to sustainability like beekeeping or green roofs), but still not completely clear. Before leaving, I often joked that I wouldn't know what I would be doing or where I would be going until well after I arrived, and I think that still holds true.

After a quick tour bus ride from the Hacienda el Castillo to the Peace Corps office in the center of Queretaro, and a few more orientation classes, we met and were taken home by our new homestay families. It was like watching puppies being adopted, as Mexican families arrived one after the other to pick up their new kids, able to identify the volunteer only with volunteer's names tagged to their shirts. Many Mexican families speak no english, and many volunteers speak no spanish, so the initial happy but awkward greeting (usually accompanied by a kiss, which throws most Americans off) was followed by more awkward, smiling silence, until the homestay families and the volunteers left together into the city on the other side of Peace Corps office wall.

Our own homestay family was given the wrong names - they knew they were looking for a married couple, but thought the couples names were Ana and Rose. What do you think was going through their minds? The family has a mother, a grandfather that we rarely see even though he lives with us, a 19-year old daughter, several aunts that pass through, and a younger niece. There is a really friendly dog, a yellow lab, called "Gringo" for obvious reasons. Aside from the awkward silence at breakfast, at lunch, at dinner (and all times in between), it is a pleasant home to be in. I'm just joking; Ana speaks with them fluently in Spanish while I sit by in silence, so the awkwardness is all me.

On Sunday, the daughter, Ale, took us to the Mercado La Cruz, where they have outdoor (cheap Chinese goods) vendors in what they call a tianguis, and indoor food vendors, a la Anthony Bourdain's "No Reservations". The food is amazing; who knew tacos could be so good with just a little lime, cilantro, and chile? We reurned to the same market later that night to eat again. 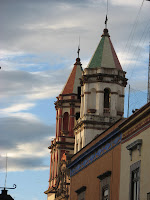 We walked around the centro (historic downtown area) all day, looked at the multiple catholic churches, sat in the many plazas, listened to music, ran into other volunteers, and generally just saw the sites. Later that night we went to a circus in the centro; it was in a small tent, with small stadium like seating, where everyone was close to the action. It was free - donations appreciated - but exciting. There was fire, jugglers, unicycles (and sometimes all three at once), men on stilts, jokes, and acrobats on ropes in the air. It was like Cirque du Soleil, except the audience was sitting with the performers, and the performers seemed genuinely excited to be there. The performers were all young, some seemed about 12 years old, and when they made mistakes or fell, they laughed and tried again (they didn't make many mistakes though). I couldn't help but feel alive and happy to be in Mexico, and almost relaxed enough to stop feeling the tension in my back from the last ten years of stress!
Posted by jajean at 7:54 PM