It's funny how spectacular works of human ingenuity and culture can feel so benign sometimes. In Mexico - although I'm new here - it seems there is an ancient Aztec, Toltec, Olmec, or Mayan pyramid in every city and town. Some are world famous, crowded with international tourists, emblems of Mesoamerica, while others are just another vacant lot in the middle of a growing suburb.

Thankfully, Queretaro has a pyramid that falls somewhere in between. El Cerrito (little hill), a 1,000 year old pyramid similar to the size of the Pyramid of the Moon in Teotihuacán, is in the adjacent town of El Pueblito, a town now consumed by the sprawling growth of Queretaro. There are few tourists; El Cerrito was not protected by the government until 1995, and restoration work involving the removal of vegetation that until recently obscured its form is still ongoing. Like with other Mesoamerican pyramids, human sacrifice was part of its function and many human remains have been unearthed from the site. The remains of a century old Mexican military leader's house can still be seen on top of the pyramid. I wonder what kind of ghost stories their kids had? 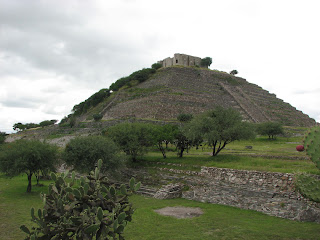 El Cerrito is only a 25 minute bus ride from the center of Queretaro, a trip that only costs 6.5 pesos, or less than 50 cents. It's almost too easy to get to - the adventure is in navigating the numerous bus routes that criss-cross the city, hopefully picking the right one, getting off on at the right stop, and finding your way back at the end.  Our Lonely Planet Mexico guide does not pay much attention to El Cerrito. Many people from Queretaro have never heard of it, and most have never visited. But El Cerrito is spectacular - its grounds are well maintained, native vegetation thriving, interpretive signage clear, and guides available - it is a Mesoamerican pyramid in every sense of the word.
Posted by jajean at 6:13 PM