It was early November; the sun was shining, the sky was a cloudless deep blue, and the fall breeze rustled the fallen leaves and desert scrub on the trails in Parque Nacional El Cimatrio. This was our fourth attempt to hike to the top the extinct volcano in the park. On our first attempt, the gatekeeper told us that we needed to obtain a pass and gave us vague directions for who to call. On the second attempt, without having obtained a pass, we tried to evade the gatekeeper and enter the park undetected, but failed to go unnoticed. With clearer instructions on obtaining an entrance pass, we returned a third time with the required forms and were allowed to enter and use the trails. But without trail maps we underestimated the time it would take to reach the top and had to leave the park to return later. With a little help from Google Earth we discovered a shortcut via a cow trail and when we returned to the park for the fourth time on our last weekend in Queretaro, we finally summitted the mountain.

From the top we could see all of Queretaro, from the pyramid in El Pueblito to the south, to the historic center of Queretaro, and across the expansive suburbs sprawling in all directions towards the mountains in the distance. The wind whistled and chimed as it blew through the radio and microwave towers above us.

﻿On the way up the mountain, the vegetation changed from Eucalyptus plantation, to pine forest, then low thorny plants and acacia brush, and finally to cactus and yucca forests at the top. Each type of vegetation brought with it different types of wildlife.

The bird-life in the park was spectacular. The trees near the bottom were crawling with various chirping warblers, tanagers, finches and sparrows. Bright red Vermilion Flycatchers, among numerous other species of flycatchers, were feeding on flying insects. Woodpeckers, like the Golden-fronted and Ladder-backed and Yellow-bellied Sapsuckers, hammered away at tree trunks. Iridescent green and blue Broad-billed Hummingbirds buzzed and chirped as they flew between flowers. Jet black Phainopeplas watched anxiously from bushes at the edge of the pond, as egrets, herons, and sandpipers fed along its shores. Curve-billed Thrashers sat atop cactus eating the bright red fruits. Northern Mockingbirds sang away, often mimicking other birds in the park. A Greater Roadrunner dashed into the bushes as soon as it saw us on the trail in front of it.

The park is also home to huge amounts of insect life. A single flowering bush in one of the high montane meadows had hundreds of small, colorful, Skipper-like butterflies, several types of brightly colored crickets, a mating pair of Walking Sticks, and was swarming with bees. We saw a small number of various lizards and turtles basking in the sunlight. Many mammals inhabit the park, like fox or even mountain lion, although they are elusive and rarely seen.


After summiting the mountain, we made our way back down towards the entrance. A single Monarch Butterfly fluttered over head into a nearby tree. I ran after it, hoping to get a photo in the bright afternoon sunlight. I found it stationary, clinging to a branch on a short pine tree, shaded by the taller Eucalyptus trees surrounding it. As I used my camera to zoom in for the perfect shot, I realized it was not alone; it had landed on the outside of a cluster of hundreds of other Monarchs and was only one in a large chain! I looked around and saw other clusters of Monarchs, one after the other, each one larger than the last. The beautiful deep, contrasting orange and black color of their wings glowed against the green foliage and blue sky. The clusters would sit silent and still for a while, then would burst into commotion, vibrating as each butterfly beat its wings until calming again, becoming motionless and hidden once again. Suddenly, a strong gust of wind came blowing through the trees, and all at once hundreds of thousands of Monarchs took flight, criss-crossing through the trees, seemingly blanketing the sky. The butterflies slowly came to rest again in a new cluster somewhere else in order to keep warm together.

﻿
The Monarch migration and lifecycle is fascinating. The butterflies that spend winters in Mexico start flying north in early spring and breed in the southern US. It takes two or three more generations to reach the northeastern US and Canada. Each generation breeds, lays eggs, and dies within a span of two months. The eggs hatch within a week of being laid. The hatched caterpillars feed on milkweed, grow fat, and begin their metamorphosis as they change into a chrysalis two weeks after hatching. Less than two weeks later a full-grown Monarch Butterfly emerges from the chrysalis and mates within a week, laying its own eggs then dying. In early fall, the final generation that hatches in the northern-most parts of their range flies all the way back to Mexico where it’s great, great grandparents started the journey six months earlier, and lives up to seven months overwintering in Mexico before heading north to start the life-cycle anew come spring. 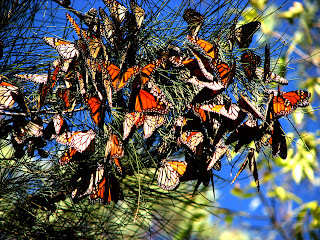 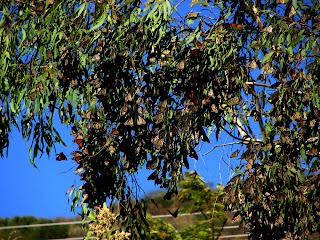 The cold weather that day was a sign of the winter to come. It brought with it flocks of colorful migrating birds from the north in search of food and shelter. It set each flowering plant abuzz with life, as sources of nectar and pollen were few and far between. And it blew in millions of Monarchs Butterflies, exhausted from their 3,000 mile journey from places as far north as my butterfly garden in Buffalo, NY, gathering to stay warm, to this little known and small patch of forest in central Mexico.