End of Week 19 - The Week Before Christmas: Atoyatempan, Sierra Tentzo


Atoyatempan is a small community about two hours southeast of Puebla. There is a community ecotourism project with cabins and trails near the Sierra Tentzo Natural Protected Area that was constructed with money from SEMARNAT last year. We arrived on Friday evening, the week before Christmas, for an office party. After eating a lot of grilled meat and corn tortillas, and drinking some tequila, our co-workers decided it was time for them to go.
The cabins were in the middle of nowhere - we couldn't see any other lights on the hills around us - and it was getting cold faster than it was getting dark. After a lot of prodding (from me), Ana and I decided to stay the night, and the owners decided to drive us to the bus in the morning. After all, I spent the first four months in Mexico trying to get out of the city and now that I had arrived I wasn't about to wuss out. Anyways, most volunteers live everyday in places like this.


As the sun set, beautiful nighthawks came swooping in over the camp. The untouched desert scrub and chalky white marble soil that surrounded us began to glow in the light of the full moon, almost brighter than when the sun was still up. We sat on top of the tiroleza (zip line) tower and looked out over the valley between us and the mountains. Mist slowly rolled in and crept into the camp, flowing over the cactus and acacia trees.

After accidently locking ourselves out of the cabin - briefly - we fell asleep. Although there was no heat and it was nearly freezing in our open air cabin, we were actually hot all night with all of the blankets that we had.

We woke, at about 3am, to the sound of explosions coming from all around us. Was it miners dynamiting hill sides? If so, why so early? Aren't there noise ordinances in the middle of nowhere in Mexico? I kept hoping that they knew we were there and would avoid blowing us up. The explosions continued to get closer and closer as the hours slowly went by. I started imagining that there was a heated land dispute outside, with gunfire at the heart of the fight, and we were about to be in the middle of the approaching war. As the sun started to rise, the blasts started moving further away from us, at last. We had survived! We discovered later that there was a religious procession that night that went from Puebla to the nearby community. They like to set off loud firecrackers in Mexico during religious processions.

The camp owners returned the next morning and brought food with them; tamales, tortillas, atole, and texca, a kind of small insect. We ate everything, grateful to have people around us that weren't trying to dynamite us. Two women from the community decided that we should go for a hike down to the river with them, and led the way after breakfast was over. We soon saw a Lesser Roadrunner bolt through the brush and a Black-vented Oriole perch atop a tree. The cactus along the canyon were tall and straight, nearly 15 meters high. We walked down into a steep river valley with giant cypress trees growing along the edges of a clear mountain stream. Black Phoebe and Blue-grey Gnatcatchers ate insects from the trees. Rock walls lined the sides of the canyon and lush green ferns grew around the springs that poured ancient rainwater into the river. At one point, the river actually flowed back under the mountain, coming out in a wide cave on the other side.

Our guides, the same that cooked us breakfast, walked with us for miles, climbed up and down rock faces, forged through the river, and taught us Nahuat (an indigenous language), never got tired. Amazingly, they refused to accept money for the hike, the stay, or the food.

That night, after returning to Puebla, we went straight to Tlaxcala for a posada at Ana's work counterpart's house. A posada is a Christmas ceremony where every night the statues of Jose (Joseph), Maria (Mary) and El Nino (Jesus) are carried to a new house after everyone eats tamales. Of course, this procession is accompanied by loud firecrackers. We spent two nights here, and the kids in the community had a great time talking to the American. They wanted to know who my favorite wrestler was, and I kept telling them Hulk Hogan. Im really not a wrestling fan, but I didn't want to sound un-cool. I think Hulk Hogan's still alive. 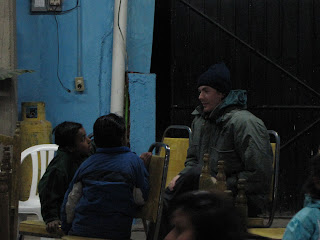