End of Week 21 - Veracruz, La Mancha, and The Gulf of Mexico

I've always wanted to see the Gulf of Mexico. The Gulf coast is famous for its bayous, shrimp, oil, and hurricanes, none of which exist where I come from in Buffalo, NY. Is the Gulf tropical, like the Caribbean, with crystal clear blue waters, or is it like the Atlantic, cold and immense? Being in Mexico, I had to find out.
About six years ago I took a trip to New Orleans, thinking I would also have a chance to see the Gulf. With my family, we drove to Venice, the last town on the road south following the Mississippi River. I thought I would find beautiful sand beaches and an amazing sunset on the coast. Instead, after miles of cypress forests and swamps in the delta - impressive in their own right - we arrived in Venice, a small, rusty, forgotten port on the river, still miles from where the Mississippi reaches the Gulf of Mexico. After Katrina, I'm not even sure Venice still exists.

Several years later, after spending almost five months in the high deserts and volcanic mountains of central Mexico, I needed a change and set my sights on the Gulf of Mexico. From Puebla, the nearest Gulf town is Veracruz, a busy oil port on the coast. Ana and I decided to spend the week after Christmas there, eating the seafood, going to the beaches, hiking and camping. We looked forward to the warm temperatures on the coast after several long months in frigid (or luke-warm by my standards) Queretaro and Puebla.

﻿﻿  The bus ride between Puebla and Veracruz is breathtaking. After several hours of desert, we passed by the snow-capped Pico de Orizaba, an active volcano and the tallest mountain in Mexico. After passing Pico, we traveled down into a deep valley, marking the entrance into the state of Veracruz. The vegetation quickly became thicker, greener, and more tropical, as the humidity levels rose. Gorgeous river canyons and cliff faces passed by one after the other. From there to the city of Veracruz was a long flat plain, mostly fruit plantations and sugar cane fields.

After arriving at the bust station in the city, we ate a "comida corrida" at one of many small restaurants across the street froom the station. Although there isn't much I expect to ever fully know about Mexico, I do know this; the food is great! A comida corrida is what you eat for lunch in Mexico. It's fast, filling, and inexpensive. For usually less than three dollars, you get a three course meal with a soup, a guisado (the main course of meat, rice, and vegetable) and a desert, with agua included (agua translates to water but is always some sort of juice in Mexico). The all-you-can-eat warm corn tortillas are perfect for dipping in the sauce that bathes whatever meat you order, and the meat is always perfectly tender. The agua varies, but is sometimes a fruit juice, orchata which is a sweetened rice juice, or jamaica, a juice made from hibiscus flowers. At the restaurant near the bus station in Veracruz, we ate beef and meatballs, in sauces with names that I can' pronounce, but better than any you can find in the States.

We spent the first night in the city of Veracruz in a hotel along the Malecon, a seaside promenade on the Gulf of Mexico. The Gulf's waters were warm and turbulent, with winter storms blowing far off the coast. The air was thick and wet there, but the constant sea breeze kept the temperatures cool.

This coastal part of the city is busy with tourists, restaurants, hotels, and markets. Street performers line the Malecon, and huge crowds gather to watch. Ocean-going container ships come in and out of the port, blowing their fog horns as they leave. Smaller barges make their way busily from dock to dock and from ship to ship. We saw shorebirds like Ruddy Turnstones and Willets along the Malecon. We ate dinner at a large cafe called La Parroquia, famous for the way they pour warm milk into your coffee at your table. They say that if you don't go to La Parraquia, then you haven't been to Veracruz.


After our brief stay in the city, we went by bus a little further north to a community called La Mancha. In the city of Veracruz and less than an hour north in La Mancha there were no signs of the destruction from a recent hurricane that devastated the area less than three months ago. But along the coastal highway in between, vast tracks of trees along the sand dunes were leefless, limbs were broken, and debris was scattered everywhere.


We stayed the next three nights in a tent at a community ecotourism center in La Mancha. It had campsites, cabins, bathrooms and showers, a restaurant and guides for tours of the area. Each night, from inside our tent, we went to sleep under the stars, with crickets, frogs, and nighthawks noisily working in the distance. We woke every morning to the sound of the dawn breeze coming from the water and to birds as they began their day. Our campsite was frequented by Montezuma Oropendolas and Brown Jays, each trying to outdo each other for the loudest and strangest noises. http://www.ecoturismolamancha.com/


The beach nearby was wide and windswept. Although crowded in some spots, it was completely empty in others. We eventually found a protected cove where the wind and the waves weren't so strong and went swimming. Brown Pelicans dove into the water looking for fish, floated up and down on the waves, and coasted on the air currents just above the surf without ever flapping their wings.  Royal Terns and Osprey soared overhead along the coast, fishing the Gulf's waters. Magnificent Frigatebirds watched from above, waiting for an easy meal to steal from the pelicans and terns.

The beach protected a large, inland, mangrove lagoon. At dusk on the second day we took a guided kayak tour of the lagoon. We floated by the mangrove-lined shores, found crocodiles waiting for perched birds to accidentally fall into the water, saw White Ibis fly out from their roost in the trees, watched Ringed Kingfisher dart quickly from tree to tree, shrieking loudly all the way, and watched as flocks of thousands of American White Pelicans soared in formation overhead, migrating on their way from the US Midwest to warmer waters further south. In some places, the lagoon was wide and open, and we watched the sun fall behind the distant mountains as it illuminated the sparkling waters in the lagoon. At other places the lagoon was narrow and dark, the mangroves engulfing you on both sides, close enough to get trapped inside their web of exposed roots.

The next day, early in the morning as the sun was rising, we took a guided tour of the La Mancha nature preserve. We walked through a wetland area and found Great Blue Heron, Little Blue Heron, and Green Herons feeding in the vegetation. We saw a family of Northern Jacanas, with their bright yellow wings exposed as they jumped up and down from lily pad to lily pad, searching for the perfect spot to feed. We were lucky enough to see a Grey-necked Wood Rail in the reeds, one of the largest species of rails. In the sand dunes and coastal forests we saw orange and black Altamira Orioles, ruddy Squirrel Cuckoos, bright-red crowned Lineated Woodpeckers, neon green Olive-throated Parakeets and brilliantly colored yellow Kiskadees.


On the last day, before heading back to the bus on the side of the highway, we decided to take one last hike into the sand dunes behind our campsite. From a distance, we saw a pair of birds perched on fence posts. As we got closer, we realized that they were Aplomado Falcons, a very rare species found in few other places in North America. The orange, black, and white plumage is astounding. It was a Christmas like no other I had ever had in Buffalo. The falcons were a final treat, and another reason, including the food and the climate, to come back to the Gulf of Mexico. 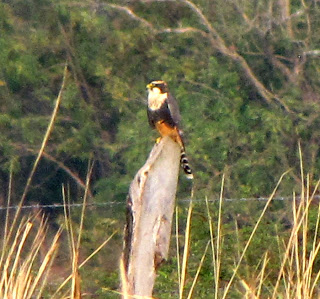