The bus driver pulled to the side of the road and parked. He signaled  to someone we had passed in the intersection, waving for that person to come over. I saw the top of a man's head pass outside along the side of the bus, from each window to the next, bouncing up and down as he ran to talk to the bus driver. When he reached the front of the bus he jumped onto the hood and climbed towards the windshield. He was the windshield washer. 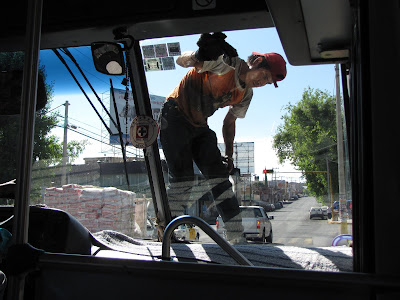 The windshield washer looked thirty years old. His shirt was dirty and ripped and his pants were dark with grease and oil. His face was rugged; his skin was thick and sun-worn and he hadn't shaved in a few days. He carried a rubbery piece of plastic in his mouth, had a rag in his belt and a bottle of grey, soapy water in his pocket. He quickly pulled out the bottle and sprayed the windshield, working from the top to the bottom in controlled zigzags. Ho took out the rag and lathered up the soapy water until the entire left half of the windshield was covered in soap suds. He soon disappeared behind the froth.

A subdued version of a cumbia song was playing loudly over the sound system on the bus. The accordions were the voice and the drums made the beat. It was slow and rhythmic. The windshield washer appeared suddenly at the top of the window in a clearing in the lather. He began scraping away the suds in long, connected arcs, from side to side, from top to bottom, moving in unison with the 4/4 beat of the song until the entire windshield was clean. He repeated the process on the right side of the windshield; spraying the soapy water, lathering it up, then scraping it away.

When he was done he paused for a moment to look at his work. He cocked his head to the side, examining the windshield - the entire windshield. He was deep in thought. His face wrinkled slowly in discomfort, displeased with the results of his work. He took out his tools again, focusing on a small smudge in the center of the glass. He sprayed, lathered, scraped, and examined. This time his face softened. He put away his tools and jumped off the hood. He was satisfied with his art.