Tonight would be the night that nobody sleeps, for some reason. And even more inexplicably, we had decided it would be fun to join in. By "we", I mean my wife Ana. Every August, the little town of Huamantla in Tlaxcala holds a fair. At one of the events, the people in the town decorate the streets in colorful carpets of sawdust, and do this all during a single night giving up their right to sleep. I'm not sure why they do this; it seems they could do the decorating during the day and still have time to sleep at night. I'm not sure why they do the decorating at all, really. I could never understand the responses to my questions.

I shouldn't make fun of this though. The designs are beautiful and more than impressive. After several hours of walking and taking pictures of the different carpets, Ana and I decided to head to her counterpart's parents' house near the center of the town. We arrived and kissed everyone before sitting down to talk. Kissing is what they do here to say hello, and it has taken a bit of getting used to. I think my Lutheran / Puritan heritage makes kissing strangers psychologically impossible. I still don't quite have it down. When I kiss some guys they stop talking to me. I think I'm just not kissing them right; maybe I just need to use more tongue, you know, to be polite.

Anyways, this story isn't about kissing people. When we arrived to the house I had to use the bathroom. Unfortunately, it was occupied. I was waiting in the courtyard outside of the bathroom when Diego, Ana's counterpart, came through a gate from the back of the courtyard. He asked, in Spanish, if I needed a bathroom. I said yes, and he said there was one through the gate. As I started walking through the gate, he made sure that I had to go "numero uno."  I didn't really see why it was any of his business and was still a little flustered from the whole kissing business, so I lied and said yes and walked through the gate. I expected to find a bathroom, but realized that it was just a backyard, explaining why Diego wanted to make sure there would be no "numero doses" going on.

Obviously, I decided to wait for the real bathroom, what I had been doing originally. And the waiting plan was a complication free success. About 15 minutes later I went back into the house and sat down. I noticed that Diego was looking at me nervously, wondering what took so long. In Spanish, he asked Ana to the side if we use the phrases number one's and two's in English. She said yes, but from the expression on his face, her response did not relieve his anxiety.

I realized then what was concerning him; he thought that I had gone "numero dos" in his parent’s backyard. Being as bashful as I am, and not having the command of the Spanish language required to speak about such delicate topics, I decided not to try to set the record straight. I figure the mystery is more interesting than the truth. The same could be said of the carpets in the streets. 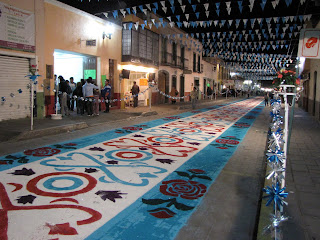 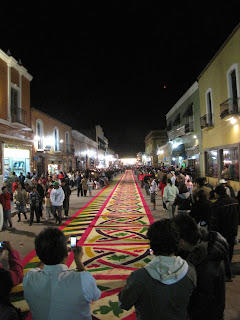 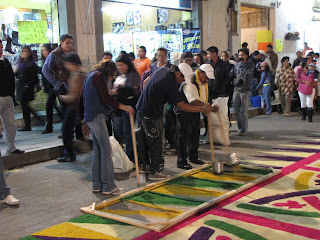 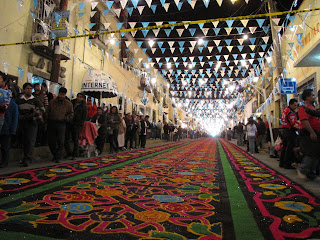 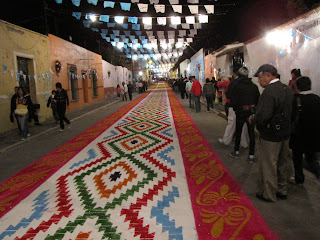 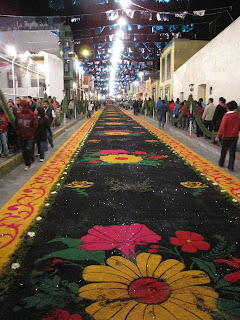 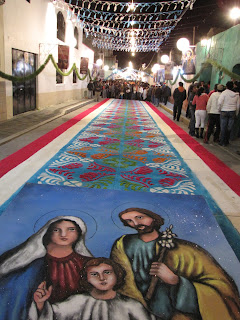 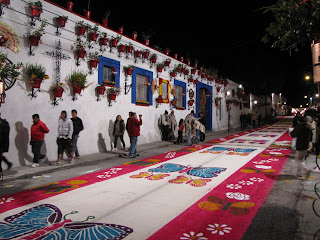