I kept looking out the bus window towards the sky. The sun was just rising over the Gulf of Mexico as we were heading down the mountains from the cloud forest city of Xalapa towards the coastal plain below. We would soon be watching one of the world's great animal migrations: the “Veracruz River of Raptors.”

Every fall millions of raptors - hawks, falcons, and vultures - leave their breeding grounds in the United States and Canada and head for southern Mexico, Central America, and as far as Argentina in South America to wait out the northern winter before returning in the spring. These migrants fly together through a narrow pass beneath the Mexican Altiplano and Veracruz's gulf coast in a span of just a few weeks. During this time, between ten thousand and five-hundred thousand raptors are counted each day at monitoring stations in the small towns of Chichicaxtle and Cardel. It is the largest congregation of migrating raptors in the world.

As the road leveled out I knew we were getting closer to Cardel, the first stop of the day's journey. Still, I didn't see the clouds of hawks that I had expected. Instead, rain clouds were rolling in from the gulf, a bad sign for hawks that soar on hot air currents and updrafts created by the tropical sun. With the recent escalation of violence in Veracruz, it wouldn't be long before the entire state of Veracruz would be deemed off-limits by Peace Corps; this was a once-in-a-lifetime trip, and my last chance to see the migration. Was this going to be one of the rare days that only a handful of raptors pass by?

The first monitoring station was under a tent on top of a hotel in Cardel. We were greeted by several volunteers who were responsible for counting the birds. They had seen one Osprey fly over and there was a Peregrine Falcon perched on a nearby cell tower, but not the river of raptors we were waiting for. A few other tourists began trickling in; a group from the Netherlands, a few Mexican couples, and even a few Americans that tried to talk to me in broken Spanish before asking the volunteers to translate their English into Spanish for me so that I could understand. I let them go on like that for a while, before explaining to them in English that I was from Buffalo, New York. The west side. (Although maybe my accent through them off a little. The southerners in Peace Corps think I sound more Canadian than American. I think it's aboot time they shut up aboot it.)

As we sat there, the rain clouds began to part and the temperatures began to rise. A single Sharp-shinned Hawk flew by. Then another, followed by a Cooper's Hawk. In the distance I saw several Black Vultures soaring. Then things went silent for a while. Nothing appeared. The Peregrine Falcon that was perched nearby had disappeared. Was that it? Was the day a bust? We all sat silent. One group decided to leave early.

Suddenly someone pointed out what looked like a puff of black smoke against the blue sky to the north, on the far horizon. Through my binoculars I saw what we had come for; it was a group of thousands of hawks, but too distant to identify. The raptors were flying in a line towards an updraft, or a current of quickly rising hot air. They were entering the bottom of the updraft, swirling together slowly up several thousand feet to the top, and then soaring out of the top in a line towards the next updraft. Throughout this entire process they never beat their wings, saving as much energy as possible on their epic journey. The river slowly came closer to us, passed over head, and then disappeared far to the south.

This scene repeated itself over and over again for the next several hours. Each group had two, three, or four-thousand raptors of different shapes and sizes. When they circled in an updraft they flew together in a confusing, busy cloud. When they left the updraft, they raced each other in a straight line in without stopping until they reached the next updraft. The groups were made up mostly of Turkey Vultures who are present throughout the migration, Broad-winged Hawks whose numbers were just peaking, and Swainson’s Hawks whose numbers would peak in a few short days.

In between sightings we sat silently on the rooftop, waiting. As the each new group of birds appeared the silence on the rooftop was be broken by the volunteer bird counters as they started pushing away on their clickers, each holding three separate clickers for the three main species in the migration, furiously clicking until the raptors disappeared again over the opposite horizon. As the clicking stopped, silence returned as we waited for the next large group to appear.

We spent the second half of the day in Chichicaxtle on an observation tower located between several little league baseball and soccer fields. The kids, coaches, and parents at the games below occasionally glanced curiously up at the strange people with binoculars and telescopes on top of the observation tower, fixated on the horizon, wondering what we could possibly be doing. We occasionally glanced back, wondering how they could go on with the game oblivious to the thousands of raptors – or one of several large flocks of Wood Storks - passing overhead.

At the end of the day, we had seen the river of raptors that we came for, a river that sometimes stretched from horizon to horizon, broken only by two or three towering clouds of birds. I saw my first Broad-winged Hawk, and my thirty-thousandth, all within a span of five hours. In total, the volunteers counted nearly 90,000 raptors that afternoon. Although we weren’t lucky enough to see five-hundred thousand raptors in a single day, it weren’t half bad, eh? 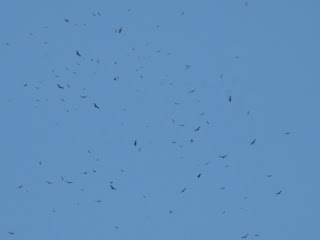 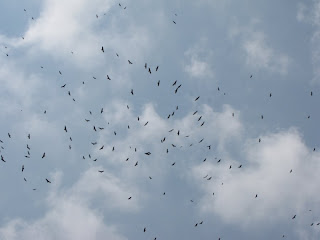 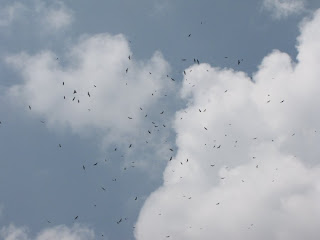